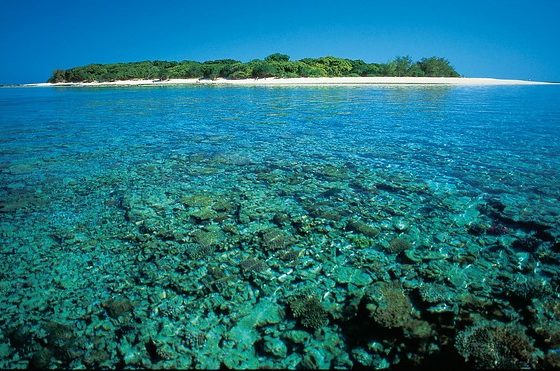 The Crew at REEF FISH AND DIVE 1770 can take you on a magical journey through the underwater world of Lady Musgrave Island. Snorkel and fish these stunning waters on our Private Charters, departing from 1770 Marina.

Lady Musgrave Island is located 96 kilometres north-east of Bundaberg, 59 kilometres east of the Town of 1770, one of the closest access points to this section of the Sothern Great Barrier Reef.

It is the second most southerly cay of the Great Barrier Reef in the Capricornia Cays National Park. The size of the island is estimated at 19.47 hectares.

Lady Musgrave Reef, which surrounds the island, is approximately 2930 hectares. It includes a large lagoon, home to an abundance of marine life and coral formations. Divers and snorkelers may come face to face with manta rays, turtles, schooling fish, reef sharks, colourful reef fish, stingrays, and even sea snakes.

Entry into the lagoon is via a deep-water channel marked on the north side of the reef, north east of the island. There has been much debate about the channel’s origins but it is generally agreed that it was created naturally but has been widened several times during the 19th century.

Lady Musgrave Island is as a significant breeding site and an important roosting and feeding site for several species of seabirds. Nesting occurs between October and March with some species present until May. Green turtles also nest on the island and there is a small, but stable, loggerhead turtle population. Between November and February, female turtles come ashore at night to nest. It is still possible to visit the island during that period but it’s well worth reading the signs on the island to avoid any disruption of the turtles during nesting and hatching periods.

Book yourself or a group of your family and friends for an unforgettable day out with Reef Fish and Dive 1770 exploring our stunning Southern Great Barrier Reef.