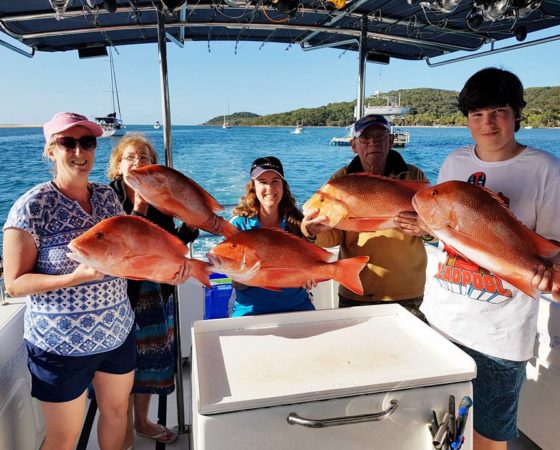 The colour red was the flavour of the day…

We welcomed a terrific fun family group on this week’s private fishing charter. Ranging from age 14 up to 75+, today’s group really produced the goods. Personal bests and first time “Big Red” catches had everyone smiling a mile wide.

And what a great way to spend time with your families. Pop, Mum, Daughters and Sons. Fishing is one of those great family activities that appeals to all ages. With our ever increasingly busy lives, a family fishing day, gets us away from all the distractions and allows us to spend fun, quality time together. Fresh air, sunshine, the smell of the sea, 3 ingredients to soothe the mind and body.

Some facts about the prized Red Emperor

Red emperor are a red, deep bodied fish with a strong, forked caudal fin and continuous dorsal fin. They are an offshore demersal reef fish and are in fact not a true emperor. They are actually a member of the Snappers and Seaperches family Lutjanidae, and are more closely related to Mangrove jack and Red bass than any of the emperor species. Juveniles and young adults are distinguished from more mature fish by three dark red vertical bands and a paler overall colouration. As they age they become pink/red all over and the banding becomes less distinct.

Reproduction
Little is known about the reproductive habits of Red emperor. What is known is that they mature at roughly 50cm and three to four years of age. They grow to over a meter in length and 33kg in weight.

Diet
Red emperor are carnivorous and feed on crustaceans, molluscs and fish within the reef system including squid, octopus, crabs, shellfish, shrimp and small fish.

Pound for pound
Red emperor prove to be a tough opponent when it comes to reef fish and it’s not uncommon to be taken to the cleaners when fishing light tackle. They are a tough fighter, will run hard and bust off on the reefy bottom given the chance. The sheer size of mature fish matched with their powerful head shaking and ability to fight from the bottom to the surface make them a formidable opponent.

Catch care
Most reds are targeted as a food fish and immediate bleeding and placing in a salty ice slurry will enhance the flesh. It is generally regarded as one of the best eating fish in the ocean so if you’re going to take one for a feed look after it properly. Reds rarely suffer any form of barotrauma so release very well. Have a go at this great recipe….

Join us at Reef Fish and Dive 1770, on board Southern Comfort to bag yourself a Southern Great Barrier Reef Red Emperor today. Booking can be made online, or by phoning 0419 709 841.